Why replace joints at all?

These days, few of us don't know someone who has had a hip or knee replacement. As we live longer somewhat healthier lives than our forebears, they have become common almost to the point of being a routine rite of passage into our later years.

The major underlying pathology that leads to the requirement to replace a joint is Osteoarthritis; a degenerative and inflammatory disease of the cartilage within the joint leading to pain, reduced range of motion, loss of quality of life and general disability.

The first hip replacement surgery took place in 1891. That's right, surprising though it sounds, surgeons have been replacing joints for over 120 years. The early procedures used carved ivory to replicate the joint and ivory (which is actually very good at binding to bone and being accepted by the immune system) was still being used as late as the 1960's. But around 1940 in the USA, the first all metal prosthetic hip joints were created and by the 1950's hip replacements were part of the standard repertoire of most centres of orthopaedic surgery.

Total Ankle Replacement; The (relatively) new kid on the block

Unlike the hip and knee, the ankle joint is rarely affected by primary osteoarthritis. In over 70% of ankle osteoarthritis the cause is due to abnormalities in ankle formation or result from trauma, most commonly associated with ankle fractures and/or recurrent ankle instability. This is often from an injury sustained decades earlier and something as small as a simple sprain.

So even today, with a mature and effective science of ankle replacement, the ankle is replaced far less frequently than other joints and a smaller number of surgeons specialise in this procedure.

Total ankle replacement (TAR) was designed as an alternative to ankle arthrodesis (fusion of ankle bones) in advanced ankle osteoarthritis (OA). Historically ankle arthrodesis was considered the gold standard for treatment of end-stage OA of the ankle joint. With fusion of the bones across the joint, the arthritis is cured and with it the pain. But this is at the price of loss of over half the motion of the joint.

Ankle Arthrodesis (AA) is very successful at relieving pain. It required a period of 3 months immobilisation, with the first 6 weeks in plastercast, non-wieghtbearing with crutches. It is a successful operation in terms of pain relief and the ankle will be stiffer, but the other joints can provide nearly half of the up/down movement through the hindfoot/midfoot. Elderly patients, patients with arthritis in other joints and the disabled with find the initial period in plaster very difficult and the final stiffness in the ankle can exacerbate other arthritic joints in the legs and back. We know that over a period of 20 years, over 75% of patients develop symptoms in these surrounding joints.

The challenge for biomechanical engineers and surgeons was that unlike its more straightforward relatives, the ankle joint has unique and quite complex anatomical, biomechanical and cartilaginous structures that allow the joint to withstand very high mechanical stresses and strains over decades.

Your ankle is not a simple mechanical hinge or ball and socket. It moves and is precisely controlled in three planes (sagittal, coronal and transverse). Moreover, because of its smaller contact surface area, the ankle has to endure contact stresses of up to 5 times the bodyweight during walking (more when jumping or running) and contains a great deal of soft tissue acting as suspension. Taken as a whole, your foot has 26 bones, 33 joints and over 100 muscles, tendons and ligaments under active control.

Despite our cleverness in engineering and computing, reproducing the achievements of millions of years of foot and ankle evolution in metal and polyethylene doesn't come easily. The US Defence Department has been trying to create a walking robot for decades and $100s of millions later the result doesn't look elegant as it stumbles along.

Hence it was not until the early 1970's that surgeons and biomechanical engineers felt confident enough to approach the challenge of replacing the ankle. 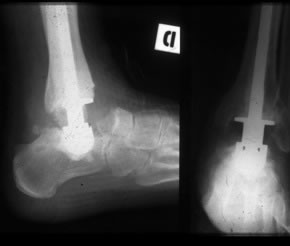 The first attempted ankle joint replacement was performed in the early 70's by Lord and Marotte, with a ball and socket type implant based on proven total hip replacement designs. They carried out 25 replacements and reviewed after an average of 5.6 years found that only 7 cases could be considered as satisfactory.

Not a success, but as with many first steps in medicine a failure upon which future success was built.

Examination of the results showed that the major problems were of alignment and the gradual loosening of the implant. The use of bone cement in this first generation of ankle replacements was a major contributing cause of failure. Larger bone resections were required to fit these implants with cement, which then exposed weaker surfaces of the talus and tibia to compressive loads. This contributed to component subsidence with early loosening. Poor soft tissue handling and the lack of appropriate surgical instrumentation resulted in wound problems and inaccurate positioning of the implants.

Results with the first generation ankle replacements were so disappointing that in the 1970's several publications advised against the use of total ankle replacements. Forty years on, things are very different.

The second generation of Total Ankle Replacement prosthesis (TARs) were developed with some major improvements including porous bead/hydroxy - apatite coating for cementless fixation, minimal bone resection techniques, attempted replication of normal ankle. The designs can be divided into two groups : two-component fixed bearing and three component mobile bearing. The fixed-bearing ankle replacements have only one articulation between the tibial and talar component, with the polyethylene insert attached to the tibial component. Mobile-bearing replacements use a moving polyethylene bearing as a meniscus between the tibial and talar components resulting in two separate articular surfaces. The moving meniscus reduces shear forces by having minimum constraints. 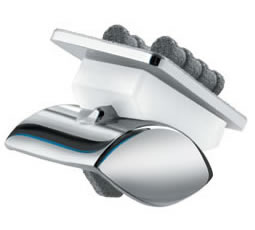 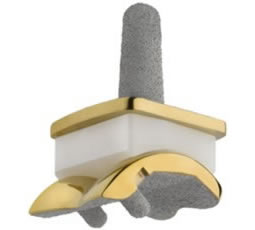 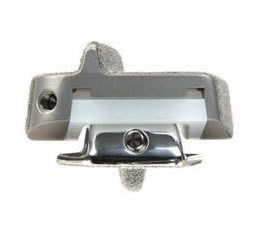 In the early 80`s the first version of the Scandinavian Total Ankle Replacement (STAR), a cemented, two-component, fixed bearing design, became available in Europe. The STAR has been further developed to a cemented three component mobile bearing implant in 1986, and to the current cementless, three-component ankle replacement from 1990. It has become the most popular ankle replacement in Europe.

If the first generation implants were a disappointment, the second generation exceeded expectations and all three designs performed well with over 90% of patients satisfied with the results 9 years later (Pyevich et al).

Currently there are about twenty ankle replacements available on the marketplace worldwide. All perform well. The latest generation all consist of three components : the tibial and talar components are made of cobalt-chromium and have a titanium porous coating for cementless fixation, some of them also with hydroxyapatite; they articulate with a polyethylene mobile bearing. 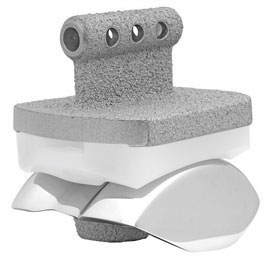 Post-operative complication rates ranged from 1.6% (deep infections) to 14.7% (impingement). Revision surgery had to be performed in 12.5% ; secondary arthrodesis was necessary in 6.3%. They concluded that ankle arthroplasty improves pain and joint mobility in end-stage ankle arthritis, but that its performance compared to ankle arthrodesis needs further study in a properly designed randomized trial.

In conclusion, short to mid-term results with third generation prostheses have been very positive with implant survival rates of up to 90% and high levels of patient satisfaction with the outcomes. These results have improved greatly compared to those of first and early second generation implants. In selected patients total ankle replacement is a promising alternative to ankle arthrodesis, particularly when performed by experienced surgeons familiar with the anatomy and biomechanics of the ankle joint.