Unless we have a problem, few of us have reason to consider our feet and the minor miracle of biomechanics they represent. We all know our hands like, well, the back of our hands, but stuck down on the antipodes of our anatomy feet live quiet workaday lives; perhaps attracting the occasional glance so that we can admire the new footwear we've wrapped them in, or to receive a friendly wave from our sandy toes as we sit barefoot on the beach.

The human foot and ankle is a strong and complex mechanical system containing no fewer than 26 bones, 33 joints (of which 20 are actively controlled for balance and movement) and over 100 muscles, tendons and ligaments.

As the only properly bipedal mammal, the human foot evolved to act as a platform to support the entire weight of our bodies and enable us to walk, jump and run with considerable agility for such a large animal. Hence we have smaller toes than our primate cousins and a foot 'arch' rather than flat feet, which literally puts a spring in our step.

That a 600 lb Sumo wrestler and a 100 lb ballerina can both use exactly the same design which in most cases will give 70 years of use, free of major problems, is remarkable. 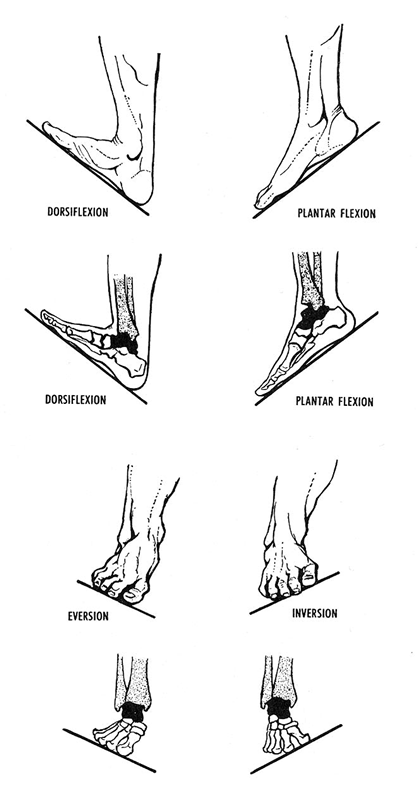 Basic component of the foot & ankle

The foot can be divided into three regions: Hindfoot (ankle), Midfoot (arches) and Forefoot (toes).

Aka the talocrural region, is where the leg attaches to the foot. Considerably more complex than the typical joint, your ankle actually has three joints: the ankle joint proper or talocrural joint, the subtalar joint which helps the foot 'tilt' to its inside and outside edges, and the Inferior tibiofibular joint which helps the ankle flex up and down.

The ankle joint does most of the serious work in stabilising and controlling your foot and the area where your tibia and fibia (the two bones that make up your lower leg) meet the talus (which sits behind the pointy protrusions on your ankle) is bound in an impressive array of strong ligaments.

Spread throughout the ankle in ligaments and tendons, there are mechanoreceptors that sense minute changes in position of muscles and bones, which are then fed to the CNS for instant corrective feedback to the position of your foot if you move out of balance. Like a modern airliner, your ankle has its own fly by wire autopilot.

Of course, accidents still happen. When you 'go over' on your ankle and develop a sprain, it usually involves one or more of these ligaments. Incidentally, the classic sprained ankle is more likely to occur when the ankle is flexed toes down such as when walking down steps or a slope, as ligamentous support is more important in this position.

Symptoms of an ankle fracture of the talus bone can be similar to those of ankle sprains but typically hurts a lot more.

The talus is most commonly fractured by either hyperdorsiflexion, where the foot is forced up toes towards the shin or jumping from a height where the forces exceed the joint's ability to absorb the energy. 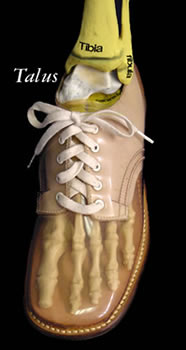 Beneath the Talus bone lies the Calcaneus, or heel bone. The largest bone in the foot, the Calcaneus absorbs the initial impact when we walk and is why it has a thick covering of fibrofatty tissue shot through with layers of springy collagen fibres that make a robust shock absorber – our heel pad.

The Calcaneus also provides a suitably solid anchor point for the Achilles tendon. The largest and strongest tendon of the foot, it extends from the calf muscle to the heel. Its strength in leveraging the foot and controlling joint function facilitates most of the power required for running, jumping, walking up stairs, and raising the body onto the toes.

With its protective layers, it is hard to fracture your Calcaneum, but I am always impressed that some people are adventurous enough to manage it.

A more common complaint is an inflammatory condition, Plantar Fasciitis or Policeman's Heel. From which name you can deduct both its cause and best cure.

In front of the heel joint and before the long matatarsal toe bones begin, are the five irregular looking bones of the midfoot, the cuboid, navicular, and three cuneiform bones. There are joints between these bones but there is very little movement in them and they are effectively rigid.

Like the keystones in the span of a Roman bridge, these bones form the arches of the foot in much the same way and act as a shock absorber for the foot.

You'll notice I use the plural 'arches', because your foot has three. Two longitudinal arches and a transverse arch held in place by the interlocking shapes of the foot bones, strong ligaments, and tightening of the muscles. Like an old fashioned car suspension with curved springs, the rebound of these arches when weight is applied to and removed from the foot makes walking and running far more energy efficient. 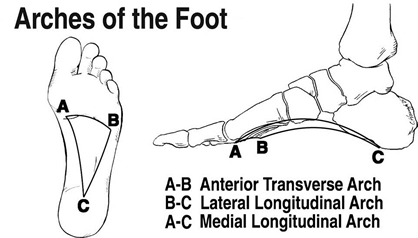 Ligaments stabilise the joints and bones and hold tendons in place. The longest of these, the plantar fascia, forms the arch on the sole of the foot like a Tie-beam from the heel to the toes.

Excessive strain on the tendons and ligaments that support your foot can result in fallen arches or flat feet (Ples Planus). Handy for the avoidance of military call up, but in a few people can lead to a certain amount of discomfort and walking instability.

Flat feet are usually normal and a natural foot shape from childhood. Flat feet that develop in adulthood are abnormal and due to failure of a tendon (posterior tibial tendon) or arthritis of the midfoot. They are more common in women over 40 and risk factors include being overwight, high blood pressure and diabetes. Flat feet can also occur in pregnant women as a result of increased levels of elastin (an enzyme which increases the stretchiness of tissues) during pregnancy.

The forefoot is composed of your toes and the corresponding long bones called metatarsals. Similar to the fingers of the hand, the bones of the toes are called phalanges and the big toe has two phalanges while the other four toes have three phalanges.

Your toes assist you while walking, providing balance, weight-bearing, and thrust during the gait. Movements of your toes are generally instigated by way of tendons actuated by muscles in the lower leg.

The hallux (big toe) is the workhorse of the group and takes 80% of the body weight when walking. It has its own muscles (Flexor, Extensor, Abductor and Adductor Hallucis muscles). The FHL is the strongest and bends the toe down. It is located deep in the calf (deep posterior compartment) of the leg. If you wiggle your big toe, you can feel the muscle moving in your calf. The four remaining toes are controlled by shared muscles (Flexor / extensor digitorum muscles). Finally, the fifth toe (the smallest toe) has a separate set of small control muscles and tendon attachments, the flexor and abductor digiti minimi. The shared tendons between the minor toes accounts for our inability to move these.

As humans have a habit of not looking where we put our feet and have a fondness for sports that involve the kicking of balls and wearing exotic footwear that puts deforming pressure on the toes, after ankle sprains, the forefoot is the area of the foot most likely to suffer some injury or pathology. In particular, hammer toes, bunions, dislocations, fractures or strain related injuries.

Contrary to popular myth, the loss of toes, does not mean an end to life as a walker or runner and although there might be some change to your gait, most people who have lost minor or even the big toe walk perfectly well.