This severe injury is named after Jacques Lisfranc de St. Martin, who served in the Napoleonic army in the 1800s.

The Lisfranc joints or tarsometatarsal joints are extremely strong and transmit huge forces, several times ones body weight during walking and running. The joints have limited movements to cater for uneven ground but essentially are rigid.

The joints and neighbouring bones are connected by a series of tough ligaments. Due to the strength of this arrangement of bones & ligaments, considerable force is required to disrupt this joint complex. 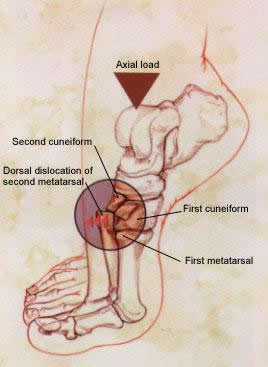 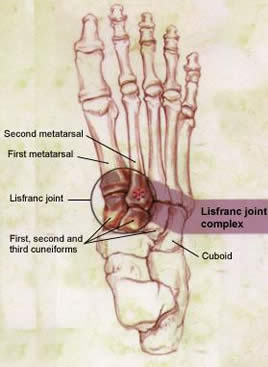 Lisfranc injuries tend to damage the cartilage of the midfoot joints. Cartilage covers the ends of bones in the joints, allowing the joints to move smoothly. If severe midfoot injuries are not treated with surgery, then damage to the cartilage and increased stress at the midfoot joints will result in both flatfoot and arthritis, which require complex surgery to correct. Even with successful surgery for the Lisfranc injury, arthritis can still develop in later life.

A Lisfranc injury has a poor prognosis for a complete recovery, even with the correct management. It often leaves significant discomfort and pain around the midfoot and often insoles are required or often further surgery.

These can be treated without surgery, but require close monitoring with x-rays and scans. Initially, I recommend a CT Scan followed by a 6 week period in a non-weight bearing cast. This is changed to a weight bearing cast or walker boot for a further 6 weeks. If there is any late displacement then surgery will be needed.

These require surgery to obtain the best recovery and function. The goal of surgery is to restore the normal position of the bones & joints, to achieve the optimal outcome. The surgery is performed through 1-3 incisions on the top of the foot, and the joints are then fixed in the correct position with plates & screws. In severe cases, a fusion of some of the joints may be necessary.

Initially the foot will be very swollen and needs elevating. The swelling will disperse over the following weeks & months but will still be apparent at 6-9 months.

This is the biggest risk with this type of surgery. You will be given intravenous antibiotics to prevent against it. The best way to reduce the chance of acquiring an infection is to keep the foot elevated for 14 days. If there is a mild infection, it often resolves with oral antibiotics. If the infection is severe, it may warrant admission to hospital and intravenous antibiotics. A severe infection often results in failure of the fusion, and extremely rarely may result in an amputation at a later date.

Ideally, the foot is fused in a position that allows optimum function and gives the best appearance. I take great efforts to judge the best position for the fusion at surgery, but as you are asleep and lying down, it is not always possible to achieve this 'best' position. If the position is not optimal following surgery, most deformities can be accommodated by insoles and shoe ware. Rarely is further surgery required.

This is when the joint fails to fuse and bone has not grown across the joint. We won't know whether this is the case for 6-12 months. The risk of this is approximately 5-10%. Smoking increases this risk 16 times.

If a non union does occur and is painful, then further surgery is usually needed.

After either surgery (reduction or fusion), a period of non-weight bearing for 6 to 8 weeks is recommended in a cast or cast boot.

Keeping the foot elevated as much as possible is vital for the first few weeks and sadly you can expect a long period of relative inactivity.

Weight bearing can be started while you are in a support boot or cast if the x-rays look appropriate after 6 to 8 weeks. The amount of weight a patient can put on their foot, as well as the distance the patient is allowed to walk, is at the surgeon's discretion. Impact activities, such as running and jumping, should be avoided until the hardware has been removed.

Activity and time off work

In general, around 4 weeks off work is required for sedentary posts and even then you ability to use your foot will be limited. 12 weeks for standing or walking posts. 16 weeks for manual / labour intensive posts.